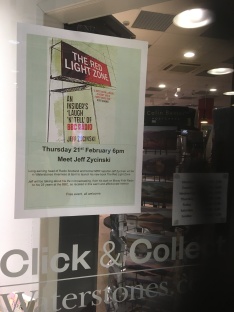 Ok, I’m not planning to have tour t-shirts made up just yet, but I thought you might like to know the dates and places where you can come and see me, heckle and chuck rotten fruit.   First up will be Waterstones in Inverness where Jo De Sylva has kindly agreed to host a question and answer session.  I’m told there might be wine. That’s at 6pm on the 21st February.  On the 16th March I’ll be at the Lochwinnoch Arts Festival being quizzed by Professor Rowena Murray. The McKillop Hall is the venue for that, at half past ten in the morning.

Beyond that there as plans afoot for a big event at the University of the Highlands and Islands and at venues in Edinburgh, Perth and Easterhouse.  I’ll keep you updated but I’m warning you now, no moshing or slamdancing will be permitted.

Meanwhile, as it’s the end of the month, a bit of fun. Just over a week ago I was invited on to Grant Stott’s show on BBC Radio Scotland. That meant going into the BBC’s Inverness studio – the offices there were my base for the last twelve years, so naturally I was expecting a warm welcome.

As the video shows, it didn’t quite turn out that way.