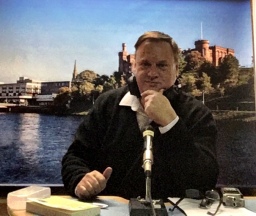 At my last bookshop event in Glasgow I was asked a question about the future of radio and, well, it was a case of lighting the blue touch paper and standing well back. My outrage at what’s happening to local commercial radio caught the attention of the BBC’s John Beattie who invited me on his show this afternoon to elaborate.

Last week, I felt like I was one of the few people talking about this issue, but a lot can happen in a week and Nick Osborne’s Local Radio Group now has the backing of five trade unions, who are all calling for Ofcom to rethink its rules change. There have also been questions asked in the House of Lords.

However, I know that when you complain about a plan, a good interviewer will ask you to come up with an alternative, so I told John Beattie that creating a new national commercial station wasn’t a bad idea, but it didn’t have to be at the expense of local radio.  Perhaps, I said,  BBC Radio 3 could take one for the team…