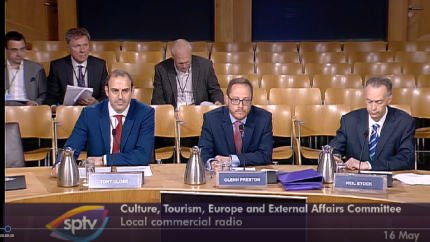 Forget Game of Thrones, did you see Scottish Parliament TV this morning? I loved the bit where an MSP brandished his smart phone and revealed that, within the past hour, he had launched his own internet radio station.  Yep, that really happened.  The fact that he called it MSP FM kinda ruined his point about the difference between FM, DAB and internet radio, but it was pretty cool.  Or what about that moment when Adam Findlay from D. C. Thomson was asked to tell the committee the latest circulation figures for The Beano comic? See that? No?  OK, how about when the bloke from Ofcom was asked to suggest a secure and sustainable funding model for community radio and he responded: “Have you got one in mind?”

Actually the three suits from Ofcom had a bit of a bad start to their day. First of all they had to apologise to the Parliament’s  Culture Committee for forgetting to tell them about their consultation process last June. Although, a little later, they back-tracked a bit and said, maybe they had told the committee, they couldn’t be sure.  Besides it didn’t matter because the consultation process had prompted only 46 responses. 35 of those were against the proposals to reduce localness in commercial radio, but Ofcom have gone ahead anyway. Why? Because they had been given “a strong indication” that Parliament was going to change those regulations.  This would be the same Westminster Parliament that’s currently teetering on the edge of collapse.  Yep, worth following that lead.  Besides Ofcom had done their own research  – no they hadn’t been unduly swayed by the big commercial radio owners – they had asked no less than thirteen people in Inverness and Falkirk for their views. We didn’t find out what those people had said, but we must assume they all wanted shot of local radio or Ofcom wouldn’t have done what they did.

Star of the morning, though, was the previously mentioned Adam Findlay. If you think I’ve been hard on the regulator, you should listen to Adam. He’s been complaining about Ofcom for years.  And he makes the most convincing case.  He wants more FM licenses advertised and cheaper access to  DAB so that more local stations can be created.  As he points out, why would a big radio owner spend money on local content if there’s no one else competing in that market and the regulator allows them to beam in programmes from elsewhere?

Meanwhile, my previous utterances on this topic, made the weekly Media Review on BBC Radio Scotland.  Odd to hear someone called ‘Jeff’ being talked about by John Beattie and his panellists.  Do they mean me?  Yikes.