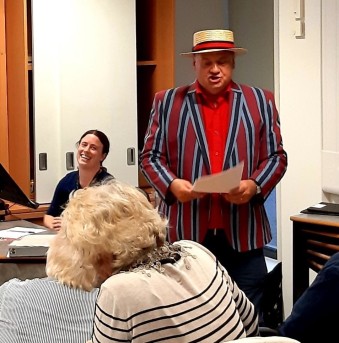 It started with a coconut and then I added a banana.  I laid these out on the table while I explained to the audience that these were my aide-memoirs.  Each one of these props would remind me to tell a paritcular story and if, by the end of my alloted hour, there were some unexplained items on the table, it would mean I had forgotten to tell them something.

“Some people tie string to their fingers to remind them of things, ” I said, “But I never go anywhere without bits of fruit.”

The cocounut and banana related to the use of sound effects in radio drama, but also on the table were three hats and a roll of sticky tape.  That last item was my prompt for a story about my short-lived stint as a stand-up comedian and my alter ego, Johnny Sellotape.  Johnny, I explained, also had a poor memory, so he taped emergency jokes to his jacket and deployed these when things got a bit, well, sticky.  The audience at Aberfeldy library seemed keen to see Johnny in action, so I donned one of the aformentioned hats and then a suitably corny showbiz jacket and reeled off some of the the most groan-inducing jokes you’ll ever find on those ‘worst jokes in the world’ websites.  Such as:

“Did you hear about the robbers who got caught breaking into a calendar factory? They each got six months.”

I kept up this barrage of nonsense until I could see that some members of the audience were becoming quite ill…then I changed hats to tell the story of the song I tried to ban from Radio Scotland.  It was ‘Santa’s a Scotsman’ of course – written and produced by my friend Richard Melvin. The two of us concoted a plan for me to ban the song on the grounds that lyrics such as “too many pies, not enough exercise, of course he’s one of us” represented a negative stereotyope of Scottish people.   When the Edinburgh Evening News came calling for a quote, I staged an immediatate climbdown and explained that ” as someone who last had fun in 1978, I have trouble recognising it in others.”

The song is now a festive favourite of Ken Bruce on Radio 2  .

The good people of Aberfeldy, including the wonderfully helpful librarian Karen MacKay (pictured above)  having suffered through the Sellotape routine, deserved a treat. So, not only did I play them a bit of the song, but I gave away free CD copies with every signed copy of the Red Light Zone.   And if you would like one, just head over to my Writes and Speaks website, (click here)  After all, Christmas isnt far away.