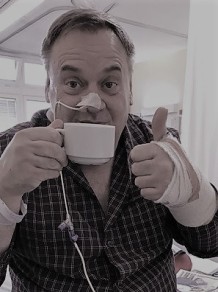 In case you were wondering, I didn’t die.  I woke up on my 57th birthday connected to various tubes, drips and drains. There were monitors beeping intermittent alerts about my blood pressure and oxygen levels.  A nurse was telling me that everything had gone to plan. She gave me a button to press if I needed more morphine then she sat on a chair at the foot of my bed and made frequent notes about my condition. If I coughed, she scribbled something on my chart. If I pressed the morphine button, another scribble. I wasn’t in any real pain, but give a man a button to press and he’s going to press it just for the hell of it. This was the intensive care unit at Ninewells Hospital in Dundee.  There were other beds with other patients. Six in total, maybe more. My view was restricted. It was a busy place; each bed had a nurse stationed at its foot and there was a central desk where sat green-suited figures peering into computer monitors and occasionally disappearing into side rooms to attend to mysterious patients set apart from the rest of us.

I’d lost a day. The 21st January to be precise, or at least most of it.  At nine that morning a jolly anaesthetist had been joking about getting me to reveal the PIN number of my bank account as he injected me with the first of his sleeping potions. I remember telling him I could feel it taking effect and then nothing. Absolutely nothing. No dreams, no sojourns into the afterlife, no white lights. Nothing.  I had no sense of time passing. If you’d woke me and told me I’d had a five minute nap, I’d have believed you. But it wasn’t five minutes, It was 24 hours and nine hours of that I’d been in the operating theatre while a crack team cut out the tumour from my tongue, replaced it with a skin graft taken from my left forearm and then patched that with another graft taken from my abdomen.  For good measure they sliced into my neck to take a hefty sample of my lymph nodes. I’d felt nothing. And now I was awake and, despite everything, I could still speak. Or at least, I could make enough recognisable sounds to tell doctors and visitors that I was feeling ok. Anything more sophisticated than that required the use of a small white board and marker pen.

I couldn’t sleep though. Every time I nodded off an irritating cough would jump-start me awake again.  I discovered afterwards that I’d taken a bad reaction to a blood pressure medication during the op and the lingering cough was probably a continuing side effect.   I stayed awake through three changes of shift . By midnight I had shaken off most of my wooziness and was tuning into all the overnight gossip between the night nurses.  One was anxious about an exam she was taking the next day, another was wondering if the extra shifts she’d done over Christmas would be reflected in her January pay packet.  In the middle of the night, an immaculately tailored doctor, clad in a three piece suit with colourful waistcoat, appeared at my bedside and urged me to get some sleep.  I promised to try, but I was still awake when the morning shift took over.

A few hours later they wheeled me to a general ward and that felt like the first bit of progress. And each day thereafter they removed one of my tubes or drains and that, too, felt like I was getting somewhere. By the third day, a physiotherapist arrived and helped me out of bed and on to a chair. My knees protested but I ignored them. What do knees know?   I began to feel human again, despite the bandages on my arm and the swelling around my neck.  I was given a Zimmer frame and escorted around the ward.  It felt great to be up and about and even better when the physio decided I didn’t need the Zimmer.  A day or two later I was making my own way to the toilet, a day after that I was trusted to shower by myself. I even shaved. One week after my operation, I was free of all tubes and drains including the one I hated most; the nasal gastric tube which took 12 hours to deliver a half litre of nutritional gunk through my nose and into my stomach.

I began to make limited conversation with fellow patients. Until then I’d given them secret nick names.  Mr Freeze was a man from Arbroath who insisted on sleeping with the ward window open all night.  The bearded man in the bed opposite me bore a slight similarity to Jeremy Corbyn, so I thought of him as ‘Jeremy’ until I discovered his name was Douglas.  Larger than life characters were the two ward cleaners who would converse with each other at high volume as they wiped surfaces and mopped floors. They were oblivious to the patients around them and would discuss topics such as the corona virus and the value of funeral insurance plans. By Thursday I was moved to a bed nearest the door of the ward and this, I was told, was a sure sign that I would soon be heading home.  And on Friday morning I got my discharge papers, had some stitches removed from my neck, waited for my head to fall off (it didn’t)  and was given a free bottle of mouthwash and sent on my way back to Inverness.

And now?  I await pathology results to see if I need radiation treatment. I’m booked for four months of speech therapy to get my voice back to a rough approximation of how it used to be. I’ve been warned it will never be the same as it was, but hey, maybe it will be an improvement. I also need to learn how to swallow food more challenging than chicken noodle soup and soggy Weetabix.

But it‘s all good. I’m so thankful for the NHS and the teams at Ninewells who work like a well-oiled machine. There was expertise at every turn: radiographers, dieticians, pharmacists. I saw such compassion and professionalism from the nurses and surgeons and consultants right through to the girl who cheered everyone up each night as she wheeled her trolley full of tea, biscuits and a secret stash of drinking chocolate.

So yes, I woke up on my birthday a little scarred and a little scared,  but that was a lot better than the alternative I’d been fearing for the past month.

Not waking up at all.