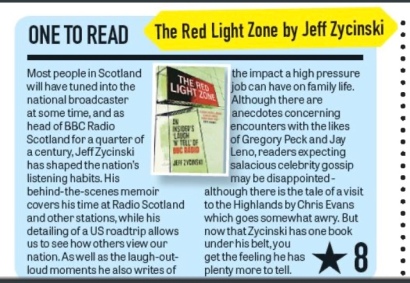 Write a book and get it published.  It probably wont make you rich but the fringe benefits are terrific. The Red Light Zone rolled off the presses more than a year ago, but the rewards just keep on coming. I’m not talking about the monthly royalty payments – which barely fund my out-of-control addiction to fresh blueberries – I’m really talking about the unexpected emails I get from happy readers and old friends. One such came into the other day from a girl I knew at school called Mary O’Hagan.  She’s now Mary McCarthy, a successful magazine journalist living in Spain. She got in touch to remind me of a an essay I’d written in fourth year English class.  It was a critique of  Salinger’s Catcher in the Rye, but I’d written it in the style of the book’s protagonist Holden Caulfield. I’d forgotten all about that, but Mary assured me that the teacher read it aloud to the class and I might have got a round of applause. What a nice memory to contrast with all the times I dodged school entirely and spent day after day riding the bus into the centre of Glasgow and staying out of the rain by exploring all the libraries, museums and pie shops.  Inevitably the Truant Officer tracked me down, blabbed to my parents, and my days as a carefree teen-about-town were over.

Then there’s the unexpected press reviews, like the eight-star ‘One To Read’ piece that has been popping up in local papers around Scotland. I’m trying to be positive so wont spend too many sleepless nights wondering why I dropped two stars. Honestly.  But why? WHY?

And of course there are the invitations to speak at book festivals like the one I’m attending in Portsoy this Sunday morning. I’m dispensing with most of my usual props and PowerPoint slides (although I’m keeping the coconut) and simply punctuating my chat with clips of audio. The book is about radio after all.

As I say, write a book. It’s the gift that keeps on giving. I might even do it again.